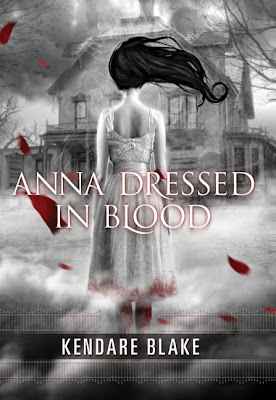 One of my most fondest memories of college is of retreating with a group of about forty girls to a farm for a late-night bonfire, telling ghost stories and generally trying to freak each other out whilst eating s'mores.

That's what drew me in to the first half of ANNA DRESSED IN BLOOD - that urban legend feel of a short, creepy story with no definitive answers or explanations. The kind that make your eyes dart around when you cross an old, lonely road late at night, or make you sit straight up in bed when you hear a mysterious thump in the attic. The kind that remind you that the unknown is the most thrilling part.

Anyone who's played the query game knows that (generally) just the first five pages are submitted to agents when a novel's being "shopped." To anyone getting ready to enter the game, may I recommend these particular first five (okay, it's actually seven) as an example to follow.

First Line: "The grease-slicked hair is a dead giveaway - no pun intended." To be honest, not one of my favorites. But, to be even more honest, I don't get very excited about first lines. I know, I know, everyone who knows things emphasizes how important it is to have a catchy and memorable first line. They rarely do much for me, so I tend to think them over-rated. Moving on.

This first chapter is essentially a self-contained story, the kind we would have told around that bonfire. It has a beginning, a middle, and an end, with a sufficient amount of mystery to prevent unsatisfying resolution - a ghost story needs unanswered questions in order to be scary. Here's a snippet:

The locals say that they beat [the hitch-hiker] up pretty good by the bridge and then dragged him back into the trees, where they stabbed him a couple of times and then cut his throat...

[Now as a ghost] He's perfectly pleasant. A nice guy to ride with. But when we get to that bridge, he'll be as angry and ugly as anyone you've ever seen. It's reported that his ghost, dubbed un-originally as the County 12 Hiker, has killed at least a dozen people and injured another eight. But I can't really blame him. He never made it home to see his girl, and now he doesn't want anyone else to get home either.

Our hero, Cas, tracks these stories, hunting the ghosts to "kill" them, forcing them to move on to... wherever ghosts go when they die.

In seven short pages we've set the premise, built the rules of the world, heard Cas's great voice, and had a ghost story about a hitch-hiker with a beginning, middle, and end. We feel like we know exactly what to expect now, and we'd like to have more.

Cas has a great storytelling voice. He uses words like "kerfuffle," which I didn't even know how to spell. It has an oral history feel to it, even though it's in present tense. You feel like you're listening rather than reading. However, I can't find an audio book version. This is nearly criminal.

I sat here looking at my Blogger for half an hour trying to think of which young, male actor who would be perfect for the audio book job, but this just reminded me how old I am. Someone, please put in the comments the correct answer to this question so I'll be able to sleep tonight. Thank you.

To help you cast the voice, here's a sample of Cas's wisdom:
* "They'd made the decision to pick up a hitchhiker, and they weren't about to let themselves be scared into going back on it. They rationalized their fears away. People shouldn't do that."
* "I always hate the sunlit towns, full of newly built developments with double-car garages in shades of pale eggshell, surrounded by green lawns and dotted with laughing children. Those towns aren't any less haunted than the others. They're just better liars."
* "I need to get people talking to me, so I can ask them questions that I need answers to... I always look for the queen bee. Every school has one. The girl who knows everything and everybody. I could go and try to insta-bond with the lead jock, I suppose, but I've never been good at that.... So I scout the halls until I finally see her, smiling and surrounded by people.... Everything I want to know, she could tell me. Which is what I hope she'll do."

Cas is comfortable in his own skin. He's not worried about what he looks like, or what he can't do. He's confident in what he CAN do, he understands his role in the world, he's brave and he's smart. He doesn't try to be anything he's not. I love him for that, and I wish more characters went in these directions.

The primary plot involves Cas investigating a ghost story in Thunder Bay (Canada), which the locals refer to as "Anna Dressed in Blood" - an unsolved murder mystery.

I loved watching Cas piece together the story like a detective, relating the anecdotes, figuring out what's true and what's legend. Even better, when Cas tracks down "Anna" and sees her for himself, Blake (our worthy author), manages to build drama and tension without it being cheesy or overdone.

It's her. She's flickering in and out like an image on a computer screen, some dark specter trying to fight her way out of the video and into reality. When her hand grips the rail she becomes corporeal, and it whines and creaks beneath the pressure.

Anna is descending upon me, coming down the stairs without taking any strides. Her feet drag horribly along like she can't use them at all. Dark, purplish veins cut through her pale white skin. Her hair is shadowless black, and it moves through the air as though suspended in water, snaking out behind and drifting like reeds. It's the only thing about her that looks alive.

She doesn't wear her death wounds like other ghosts do. They say her throat was cut, and this girl's throat is long and white. But there is the dress. It's wet, and red, and constantly moving. It drips onto the ground.

Well played, Blake. The building cadence of a good ghost story, and it feels like it's being spoken aloud. Again... why isn't there an audio book!? Normally I wouldn't care, but this one is screaming for it. GET IT DONE!

THE GOOD AND BAD RELATIONSHIPS

I said earlier that the first half of ANNA DRESSED IN BLOOD felt like a oral, bonfire ghost story session, and that's what drew me in (I read it on Halloween, by the way). However, somewhere in the middle, it took a bit of a forty-five degree turn and started feeling something more like I AM NUMBER FOUR - and I'm not sure that's a good thing.

I preferred Cas on his own, without all of the sidekicks. My favorite relationship in the book was between Cas and his semi-evil cat.

"He's half Siamese and has that breed's trait of choosing one person to adore and saying screw off to all the rest. Not that I care. I like it when he hisses and bats at me, and the only thing he's good for is occasionally seeing ghosts before I do."

After I read that section, I wrote down in my notebook "Watch relationship with cat - potentially SUPERB." And it was. Fantastic.

Cas also had an interesting tension with his deceased father. We figure out very early on that Dad was killed by a ghost, leading Cas to become what he is, but the tension is drawn out a bit longer than I preferred. Seems like we wait artificially long to find out what exactly went down. That's being pretty picky, though, if I were Blake's critique partner.

My bigger criticism would be for Carmel (the Queen Bee of the high school) and Thomas (the nerdy psychic outcast). Carmel reminded me of Sarah Hart, and Thomas seemed like a Sam Goode doppelganger. Their tagging-along added a bit of a cartoony element, almost Scoobie Doo-ish, breaking the tension of what had the potential to be a truly scary ghost story.

And then there was Cas's interactions with Anna... never fully wrapped my brain around that, either.

It's hard to write a long ghost story and hang on to that tension. It's hard to resolve things in a ghost story, because the unknown is what makes it cool. In the light of day, with the mysteries explained, it's not fun anymore and you end up feeling kind of silly that you were ever scared.

But this is a novel, and I guess you have to answer and resolve. Kind of too bad - this might have been a fun opportunity to test those rules JJ Abrams-style, see what we could have gotten away with. That all being said, if I ever see another Kendare Blake book, I wouldn't think twice about picking it up.

If you'd like to win a gently used copy of ANNA DRESSED IN BLOOD... and, what the hell, maybe even some Halloween candy to go with it (if you're good), leave a comment below letting me know you want it. Random Number Generator will decide the winner on Monday November 14, open internationally to those aged 18 and older.
Posted by Unknown at 10:53 AM