Book Study - The Girl of Fire and Thorns 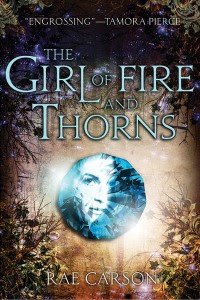 THE GIRL OF FIRE AND THORNS by Rae Carson was the probably most satisfying, well-rounded book I read in 2011. Why do I grade it so high? So subjective, but so important to try to explain what makes something feel complete.

I often liken the voice of a story to an actor in a play, and this book is an especially good example because of the many subtle ways Carson developed the first person narrator. Just as an actor doesn't typically open a play with a soliloquy about who she is and why she's here, Carson drops us in a scene already in progress and lets us figure it out on our own. The main character, Elisa, is a sixteen year old princess who has just been given away in marriage as part of a political alliance. This is not a particularly innovative story starter, but Carson builds Elisa in front of us, revealing one subtle layer at a time, alternating between the three relationships that most define her: family, food, and faith.

Example: First few pages, our introduction to Elisa
Those three items build and layer upon each other throughout the entire book, all interwoven, sometimes all within a single sentence. You can't separate them, they are so connected, the basic elements of who she is. At first I thought the items regarding food were some sort of teenaged false-modesty mixed with insecurity - your traditional, 'don't look at me I'm a size six and hideous' sort of thing, but no - our little Elisa is legitimately fat (and see what author Rae Carson had to say about it here, as an interesting aside).

There are multiple scenes featuring feasts, especially in Part 1, and each one reveals more about what Carson describes as 'Elisa's unhealthy relationship with food.' You want to hold an intervention and say, STOP IT, you're just making things worse! The reader winces at her unattractive behavior, she's her own worst enemy, and I respect Carson for not being afraid to make her girl messy and imperfect. But as Elisa changes, her relationship with food changes. Her relationship with her (ever expanding) family changes. Most important of all, her relationship with her faith changes. In each case, they are in some ways improved, and in some ways not. It's these messy relationships and how they are resolved (not perfectly, but completely) that make this particularly satisfying throughout the entire process, not just at the end.

The story is linear (no skipping forward or backward in time), but it's structured like a three act play - Part 1, pitfalls and politics of royal life, Part 2, set amongst rebel bandits, and Part 3, the inevitable bloodshed and collision of the first two parts. But our narrator doesn't plateau in her development midway through the story, as we see so often.

It's not unusual at all to find a story about a 16 year old girl learning to believe in herself; there is a bit of that in this book, but the issue of faith goes much deeper. She's challenged to believe in something deeper than herself - since she was raised as a religious icon (chosen to dedicate her life to a mysterious act of service), her journey from palaces to deserts to battlefield challenges her to question everything she knows, down to the most basic, molecular level of her existence: Is there a God, does God choose champions, is she that champion, what does this mean? She might as well be writing a college philosophy essay on the burning question: 'Do I really exists?'

Elisa's journey is a series of blind leaps of faith, to see if her faith plays out or falls flat. In the end, it doesn't really have anything to do with her - her story is bigger and deeper than that.

The pieces of this story are cleverly assembled. Character, plot, and world building are all well balanced. Nothing is wasted, nothing is meaningless, and nothing feels like clip art inserted as a placeholder. This is not a story that inspires skimming; it's not something you wish to read quickly.

I've read a lot of books where I couldn't wait to get to the end, and in fact I sacrificed enjoying the middle so that I could get the satisfaction of the ending. But the ending wasn't what made this story satisfying, so there was no rush. There were so many subtle morsels along the way that it slowed me down, encouraged me to linger. That's what made it a rare treat - it wasn't about any one thing, it wasn't about just getting to the end.
Posted by Unknown at 6:46 PM