Soccer and being in on the joke

A little over a year ago I decided to like soccer. I was stupid about it. I'm still stupid about it, but I know enough now to feel like I'm in on the joke, which is really all I ever want out of life.

One of my co-workers is a distinguished white-haired English gentleman. In my very early soccer days (like, when I was still figuring out what 'injury time' was), I made conversation with him by asking, "Which team do you support?" He shook his head with a laugh and told me to guess. "I don't even know the team names," I protested. So he let me off the hook and told me he supported Chelsea. He said it as though it should have meant something to me, but I didn't get the joke.

A few months later I started to get it. Last season (maybe every season) Chelsea was a white-hot soap opera of a mess. Their team captain was taken to court on racism charges. Their highly paid scorer developed a tortuous mental block and couldn't hit anything but the goal frame (I decided to name him Sad Fernando because, well, he looked sad). Their thirty-three year old coach always wore the same clothes, regardless of the weather... until he was fired mid-season. Their oil-baron owner reminded me of George Steinbrenner on steroids and their general aura reminded me of the Hollywood Lakers. An odd match indeed for my distinguished Uncle Chelsea.

Midway through the season, I'd decided to try cheering for Everton - a scrappy team from Liverpool (birthplace of the Beatles) that seemed stuck in perpetual underdog status and tended to play some American players (not to mention their uniforms are COLTS BLUE). I mentioned it to Uncle Chelsea in passing. He shouted at me. "EVERTON!? What are you mad!?"

The more he teased me, the more attached I got. I loved it enough to drag myself out of bed pre-7am on Saturdays. There's very little in life I love that much. VERY little.

European soccer holds a tournament each year that reminds me of our NCAA March Madness - the best teams from each country qualify to compete against each other in the Champions League. Chelsea took its drama on the road, traipsing around Europe until they inexplicably won the whole thing. 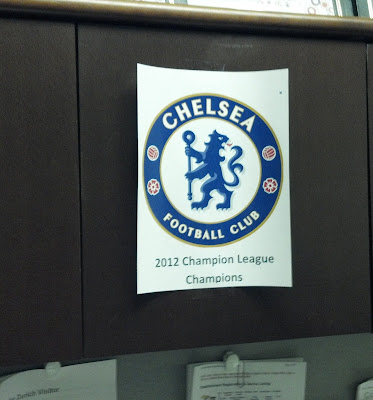 So I, um, improved it for him. 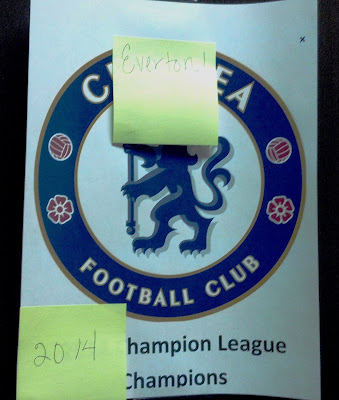 It took him a little while to notice. When he did, he stormed into my cube and slapped the post-its down on my desk, having done a little redecorating of his own. I could not have been more delighted. Those post-its are still hanging on my cube wall, simultaneously taunting and motivating me. 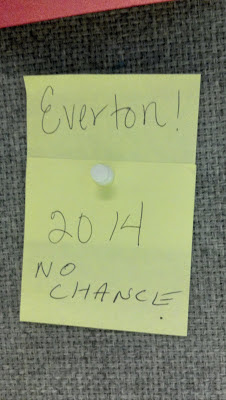 Weeks and months passed. The London Olympics came and went. A new season began. Chelsea's still in first place, as tabloidy as ever.

A couple of weeks ago, Everton was in second.

Uncle Chelsea came into my cube, pointed at my prominently displayed post-its and declared, "Well, we know who's in first, don't we."

And even now, as I pass his office on my way to the parking lot, he'll shout, "EVERTON ARE GOING TO LOSE THIS WEEKEND!"

Half the fun is being in on the joke; the rest is having others willing to share it.
Posted by Unknown at 9:22 PM