Would I Like MISS PEREGRINE'S HOME FOR PECULIAR CHILDREN Without the Photographs? 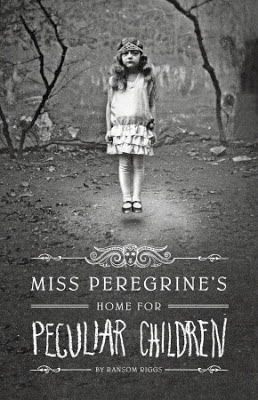 I downloaded Ransom Riggs' e-book after hearing sparkly reviews (and finding out that Riggs is a cohort of Tahereh Mafi's). But once I'd finished and attempted to digest it, I realized the majority of my joy at reading this book was inspired by the vintage photographs and my delight at discovering they weren't just CGI creations for the book, but rather relics that Riggs had accumulated through collector friends.

From the Acknowledgements section at the end of MISS PEREGRINE'S HOME FOR PECULIAR CHILDREN: "All the pictures in this book are authentic, vintage found photographs, and with the exception of a few that have undergone minimal postprocessing, they are unaltered. They were lent from the personal archives of ten collectors, people who have spent years and countless hours hunting through giant bins of unsorted snapshots at flea markets and antiques malls and yard sales to find a transcendent few, rescuing images of historical significance and arresting beauty from obscurity-and, most likely, the dump. Their work is an unglamorous labor of love, and I think they are the unsung heroes of the photography world."

These photographs take reader from the realms of mere 'reading' to full-fledged 'experiencing' the story. They add depth and help you get lost in the world Riggs is building. But what if the photographs weren't there? Would I still have enjoyed the story? Would I have been as easy-going about story elements that normally rub me the wrong way? And how different would the reading experience have been if I'd had the hard cover book instead of the electronic version?


So, now that I've mentally removed the photographs from my e-book, a little text analysis...

PRO
* I loved the mystery of trying to piece together Grand-dad's past - from when he was a young Jewish boy escaping Nazi-occupied Poland, to when he was the only one who walked away from the midnight blitz in Wales.

CON
* A little bit of me was disappointed that the mystery of Grand-dad's past ended with a paranormal solution. I feel like if there had been some other real-world explanation, that could have been, in the end, even more magical for its plausibility. But, 'paranormal' has never been my genre of choice, so that's on me and my personal tastes.

PRO
* Island off the coast of Wales makes for different, interesting setting - especially when exploring the big, empty, bombed-out house. I was lukewarm on the Floridian setting - a wealthy family of pharmacy magnates and grandpa in his retirement village left me disinterested. But the island itself, with cliffs and lighthouse and bogs, surrounded by shipwrecks, powered by generators and drowning in sheep - that island popped so three-dimensionally by comparison that I can't help but feel it was done that way by design (much in the way the 'Wizard of Oz' goes from black and white to color).

CON
* Time travel loop struck me as cliche, like the 'dream sequence' in the book REVOLUTION where the girl awakens to find herself in revolutionary era France for reasons I still don't understand. This sort of spontaneous time-travel often strikes me as a cop-out, but I talked myself into this one, much like I did with the JJ Abrams version of Star Trek. I think it was at least partially due to my fascination with the photographs, like they lent an aura of credibility. But for the purposes of this exercise, I have to ignore the photographs, so I revert to my initial gut feeling. Down with overly convenient time-travel devices.

PRO
But, the fact that we could move back and forth between the 1940's and modern day as we pleased without the threat of being 'trapped' - that went a long way toward helping me keep a good attitude about the story. We floated easily between island's two settings - one, a raging modern-day thunderstorm with a blood-thirsty murderer on the loose; the other, a 1940's blitzkrieg in which we knew a significant portion of the island would be heavily damaged (thanks to the island's history museum). A lot of good, sensory world building that would look fantastic on a movie screen.

PRO
Also, I loved how every time we arrived in the 1940's, we always relived the same day - like the movie 'Groundhogs Day'.
I actually would have like to have seen more of this repetition; it could have added a lot to the characters of the children who perpetually existed there.

CON
Once we started meeting all of the peculiar children in the 1940's children's home, I had a really hard time keeping track of who was who. I'm not sure if this is an issue Riggs' character development, or just of my shoddy reading, but at any rate, not all supporting characters were created equal. So many of them felt one-dimensional, solely defined by their peculiarity, and half the time, when I saw the characters' names in print, I couldn't remember what their peculiarity was until they actively used it. Off the top of my head after one read, all I remember is that Olive defies gravity, Millard does invisible things, Wyn is Hercules-strong, and Emma is both hot and makes fire (these things are related, and therefore easy to remember). The 3-12 other male characters blend together in my mind, and I can't tell you anything about them without going back through the text and creating a chart.

CON
By the way, was anyone else a little on edge about Emma having a crush on both grand-dad and grand-son? Only in paranormal does that sort of thing make for an okay happy ending. Like how Bella and Edward can pretend they're the same age. Or in '30 Rock', when Liz Lemon almost dates her own cousin. You know what, never mind, forget I said anything.

PRO
Since I took a whole paragraph to pick apart supporting character development, let me now take a paragraph to praise it. I found the narrator's parents compelling, allowing Riggs to explore some interesting themes - such as how a kid might develop his attitude toward money by watching his mom, or how father/son relationships might be passed down through generations. The father was particularly interesting to me, because he's caught in the middle of a closeness between his father (grand-dad) and his son (our narrator, Jacob) - but he's on the outside looking in, envious. The father is the outcast who has never belonged anywhere - even his own pet projects seem to reject him as inadequate. And even still, we find ourselves hoping the his son will ditch him for the more 'peculiar' life, leaving him sad and abandoned again. Very nicely crafted.

CON
Before we leave the subject of character development, I never fully warmed to Miss Peregrine, who struck me as a reworked Professor McGonagall type, only with less attitude and bird wings instead of a cat's tail. She seemed to exist to explain the rules of the world, and to give the children a common 'something' to fight for. And for the sake of withholding spoilers, I was disappointed to the point of eye-roll with the way the core villain was handled. I'm fascinated with so much of the character development in this book - some of the work is so precise and interesting, it makes me wonder if Riggs knows he's fully capable of it, but decides to choose his battles for the sake of managing word count.

SO IN SUMMARY...
There's a lot to like about this book, imperfect though it may be. But the photographs were such an integral part of the experience for me that I think, without that added bit of depth, I wouldn't have spent the past two weeks meditating on it. I don't think I would have felt compelled to recommended it to others. But the photographs are there, and they do compel you to keep turning the page. I thoroughly enjoyed my experience with this book, and I give Riggs full marks for thinking of using this method of storytelling in the first place. This book has an IMDB page; I hope that evolves into a Tim Burton-style, eye-popping final product. I would absolutely see that, and recommend it to others.
Posted by Unknown at 8:24 PM