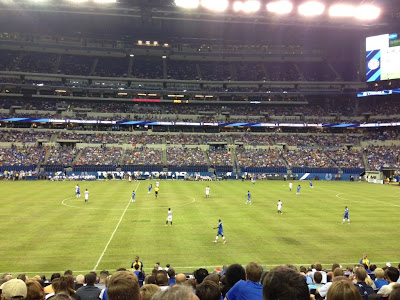 On August 1, I took my parents and my husband to watch what amounted to an exhibition soccer match in Lucas Oil Stadium with about 41,000 of our closest friends (including my cousin Katie who provided these pictures - thanks Katie!). We were there to see Chelsea, one of the world's elite soccer teams, all the way from London, dressed in the same blue as everything else in the Colts' stadium. Their worthy opponent: Inter Milan from Italy. One thing was immediately clear: the home crowd LOVED Chelsea. Most of us were there - in Indianapolis - specifically to see them.

Maybe it was the color, maybe it was Chelsea's marketing team successfully drumming up interest here State-side. Either way, brace yourselves sports fans: English soccer is coming.

Close your eyes and think of college football. There are more than 100 Division I teams, but only 25 at a time are 'ranked.' Teams are scattered around the country such that it's hard to find a community without an allegiance.

Now shift your mind to baseball. Players move up and down through Major League, Triple-A, Double-A, and "A." Teams date back to the 1870s/1880s. If you look at a map of the destruction caused by the Great Chicago Fire in 1871, you'll find the 'White Stockings' field nearby.

Now mentally squish these images together. Throw in a dash of NFL physicality (minus the pads) and NBA speed (minus the height). Make the clock count up instead of down, and remove all timeouts and commercial breaks.

You're almost ready for the English Soccer Experience.

* Last year, NBC bought the rights to show 380 English Premier League games. Games start on August 17th and run through spring (long past the end of NFL season). Most of them will be on Saturday and Sunday mornings, and since soccer games can end in ties, you'll always know EXACTLY what time they will end (an underrated perk of being a soccer fan). And just LOOK AT THIS SCHEDULE! Most of the games begin at 10am EST, the perfect time to ease into the day with a cup of hot tea.

* Soccer in England is broken into four levels: The Premier League (20 teams), The Championship (24 teams), Division One (24 teams), and Division Two (24 teams). Kind of like our baseball system, no?

* NBC is televising games between the 20 Premier League teams. They'll play each other twice (home and away), for a 38 game season, roughly one game a week.

* Note that it is specifically the "English" Premier League. England has its own league. So do Scotland, and Spain, and Germany, and several other countries (including America's MLS, which we share with Canada).

* You know how every March, we watch the NCAA basketball tournament, featuring (X) teams from the Big East and (Y) teams from the Big Ten, PAC-howevermany, mid-majors, etc? The best 68 teams from the various conferences compete and typically Duke or Kentucky wins? In soccer, the equivalent is the Champions League - the top four teams from England qualify, the top few from Spain, and Germany, Russia, Turkey, Belgium, France, etc, and they play to crown the best team in Europe.

* Behold, the League Table, which not only tells you who's winning - it tabulates points, wins, losses and so much more. A win is worth three points, tie is worth one, and a loss gives you nothing (kind of like hockey). Points are most important, but goal difference matters. If you CAN run up the score, you probably will.

* Here is a MAP showing where all of this season's English Premier League teams are located. For the first time in league history, two of the teams are in Wales.

* But keep in mind, whenever anyone says "for the first time in league history," the English Premier League as it's currently organized was founded in 1992. This general soccer system has been in place for over 100 years, but the league did some refreshing and rebranding - and it exploded globally as a result.

* Six of the twenty English Premier League Teams are owned by Americans.
* Don't have the time to research which of the 20 teams is right for you? There are some cheatsheets available below to help you get started. Just keep in mind that, thanks to promotion and relegation, the league CHANGES EVERY YEAR. This isn't annoying, it's part of the drama - like characters coming and going on Game of Thrones!

You can look here and here and here and here to get started, but I'll post my take on the 20 Premier League teams in part 2. When in doubt, you can always just cheer for the elite American players (for example, goalie Tim Howard plays for Everton, Jozy Altidore just signed with Sunderland, and Stoke City has a couple of Yanks, as well).

* Here is NBC's EPL schedule so you can PLAN. Soccer isn't just coming - it's already here.
Posted by Unknown at 6:08 PM