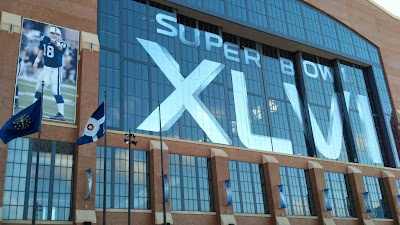 This game was about the relationship between a player and a city. It was more of a ceremony than a game, one the fanbase sorely needed. We needed this chance to say thank you. We needed Peyton Manning to know how much we love him.
And the love radiated.
Peyton came home to the stadium he built in the city he redefined. The site where his brother won a Super Bowl during the season he missed. He played in front of an incredibly intelligent crowd - one he trained himself.
And the Indianapolis Colts - the team and the fans - gave him the best of our best.
For the first time EVER, Indy fans unleashed a wall of noise while Peyton possessed the ball - and the TV cameras were smart enough to zoom in on the crowd during that first snap to show how the crowd RELISHED that opportunity. The fans seemed to be saying, "Look! We remember what you taught us. You made us what we are. We want you to be proud."
It felt like a playoff game - the team, the crowd, everyone giving their best for the best.
Obviously, tonight Peyton would have preferred to leave with a win - but in the long run, hopefully he'll appreciate the legacy he left behind. When he came here, the Indianapolis Colts were perennial losers with TV blackouts. Over the course of fourteen years, he literally wrecked his neck dragging us out of the muck. Tonight, we got to show him that we're good stewards of all he gave us. We didn't fall apart, we didn't roll over. He made us better, and we won't forget. We gave him all we had and rose to the occasion.
What better compliment could we give?
He deserves nothing less than our best.
Posted by Unknown at 12:25 AM

Email ThisBlogThis!Share to TwitterShare to FacebookShare to Pinterest
Labels: sports