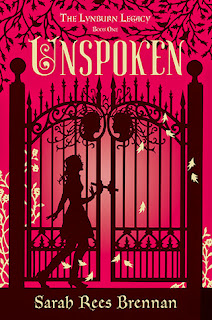 Earlier this month I was invited to participate in #YALaunch, an author event in Omaha, Nebraska highlighting debut authors Kate Brauning and Nikki Urang, who have been critique partners for years and just happened to have their books released on the same day. I'll do a proper write up on this one day soon (there are rumors that links to videos might be made available), but for the purposes of this post, #YALaunch is when I at last met my friend Alex Yuschik, an amazing lady who is getting her PhD in Mathematics by day and writing modernized Shakespeare by night. Much to my surprise, Alex showed up in Omaha with a stack of three books and instructions for me to take them back to Chicago because she thought I'd like them.

I trust Alex, so I jumped in with the first of those books.
UNSPOKEN by Sarah Rees Brennan.
Let the post-read freewrite begin:

I'd heard of Brennan and knew she had a great reputation, but I hadn't read any of her work before this. As is my usual habit, I didn't read the jacket copy or any other summaries (because they often tell you what happens through the first 1/3 of the book and it's no fun "discovering" things you already know). It's a paranormal, which isn't usually my favorite thing. I'm not that in to creatures (werewolves, vampires, ghosts, etc). But I do enjoy psychics and a good witch/wizard, and this is more in that direction.

The general idea is that the main character (Kami, an English girl of Japanese heritage) has had an "imaginary friend" her whole life, someone she talks to that no one else can see. Kami can't see him either, but she can hear his voice in her head. When she's older (17 I think?), she meets the guy who is the source of the voice, an actual guy who can actually speak into her mind. Turns out their voices are reciprocal.

"Mind Reader Boy" books aren't that rare in YA, but I did especially like this one, not for the gimmick itself, but for the voice. It's one of the "voiciest" third-person books I can remember reading. It's probably 90% from Kami's point of view with a few very brief jumps into the boy's (Jared) perspective. And, in a refreshing shift from other "mind reader boy" stories, romance isn't the point. They're trying to solve a mystery, and Brennan really sells the stakes, especially in the last act. Kami's a budding investigative reporter, and since she has the reputation around their village as "the crazy girl who hears voices," people kind of let her do whatever she's gotta do.

This book has a funny, energetic voice. It has fun, well-rounded supporting characters (I especially enjoy Kami's best friend Angela, who will do just about anything to avoid human interaction, and who plans her life around nap-taking). My only qualm was that, as much as I enjoyed the voice and wanted to spend time with it, it didn't sound especially English to me. Granted, I'm just another loud-mouthed American, but there were a few instances that pinged the back of my mind and made me think, "Is that really how an English teenager would say this?" But, then I was reminded that Sarah Rees Brennan is actually Irish, so perhaps that accounts for some of it? Or perhaps I have unrealistic expectations of modern, teenage, English voices?

Their world is a charming little English village (Sorry-in-the-Vale, which in my mind, is Night Vale with a woods instead of a desert) run by an old-school, feudal, manor-living family. It's about 80% pleasant village and 20% suspense as the mystery intensifies toward the end.

Alex also gave me the second book in the series, UNTOLD, so I'll jump right in to that while this world is still fresh in my mind. Would recommend this to those looking for a pleasant, lighthearted read with some elements of suspense and magic.