A few years ago, I was convinced that Chicago would get the honor of hosting the 2016 Summer Olympics. Obviously, I was delusional (and it still stings). But, around that same time, Indianapolis put in a bid to host a Super Bowl - an effort that seemed like a much bigger long-shot at the time. This weekend, Indy gets its chance to shine on a global stage.

Indianapolis: the Circle City, the Crossroads of America - 12th largest city in the United States, home to approximately 780,000 people, a city largely defined by it's role in the sports world. The Indianapolis Motor Speedway hosts the Indy 500, the Brickyard 400, and used to host the only Formula One race in the States. The NCAA Headquarters are in Indy, and they host the NCAA Final Four about every four years. They host the Big Ten Championships in basketball and football on a regular basis. It's the home of the Indiana Pacers NBA team, the Indiana Fever WNBA team, and the Indianapolis Indians AAA baseball team (which feeds into the Pittsburgh Pirates system - I know, I know, not something most people would brag about). Not to mention the Butler Bulldogs, NCAA basketball championship finalists two years running.

Little Midwestern towns aren't supposed to host Super Bowls, especially not during the teeth of winter. But, when I made my way 'home' last weekend, I saw a city full of vibrant, shiny people who couldn't wait to welcome the biggest event in American sports - even if it did involve their most bitter rivals, the Patriots.

Here's a sampling of our visit: 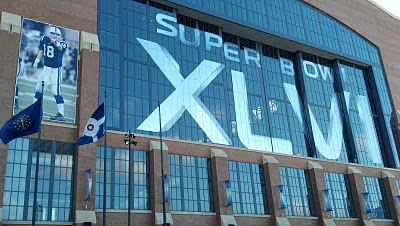 In Indy, the football, baseball, and basketball stadiums are all within a few blocks of each other, centrally located in the center of town near Monument Circle. These few blocks were shut off to car traffic and transformed into the "Super Bowl Village" - inspired by the Winter Olympics. The picture above is of the football stadium. Last year at this time we were enjoying a big snow storm, but this week Indy's had temperatures around 60 degrees. It would be glorious if they could have the stadium's retractable roof open for the game, but I'm not going to hold my breath. 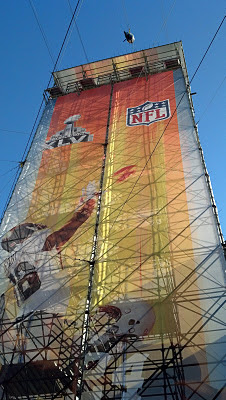 One of the features of the Super Bowl Village is this tower, which rises 100 feet in the air and houses four ziplines that take passengers zooming across 800 feet of the village. I didn't ride it, but I watched for awhile, and the crowd milling about below enjoyed shouting at the zipliners as they whipped by. I'm guessing it was much colder for them up there than it was for me, but they all looked happy. 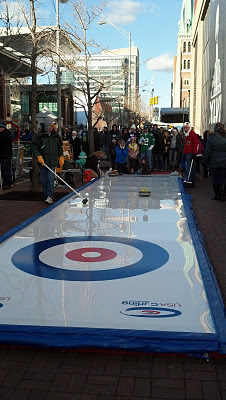 Keeping with the Winter Olympics theme, the village had several winter activities, such as curling lessons. There were also several indoor events, such as the NFL Experience (an interactive display housed in the shiny new Convention Center), the Play 60 thinger, where kids could learn how to catch and take handoffs from real Colts players and get those black eye stickers. I thought the Play 60 thing kind of looked like a snow globe, but I apparently didn't get a picture of it. There were also two live performances stages in the village, where spectators gathered for free concerts. The whole area had an upbeat, bouncy rhythm to it. 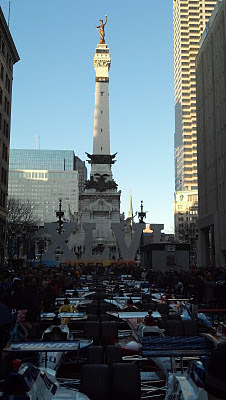 Quite possibly the COOLEST thing of all were the Indy 500 race cars lined up by Monument Circle - 32 race cars, painted to look like each of the 32 teams in the NFL, and one generic NFL car, all lined up in eleven rows of three, just like the starting lineup for the Indy 500 race. Tied the whole event together quite nicely, and the fans were CRAZY about them. Everyone wanted to get pictures with their favorite team's car. 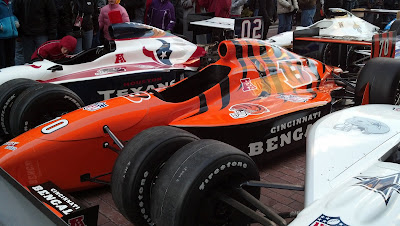 My husband took this close-up of the Cincinnati Bengals car, after he drooled over it for an indiscernible amount of time, repeatedly mumbling, "Look at my car! It's the best looking one, LOOK AT IT!" As he gazed longingly at the orange and black stripes, I watched a group of college guys 'Tebowing' for the cameras by the Denver Broncos car, and a group of high school girls 'Discount Doublechecking' by the Packers car. I'm telling you, people LOVED those cars. 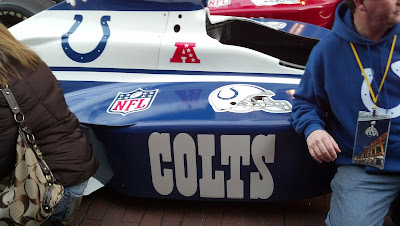 To state the obvious, last Saturday the festivities in Indy were largely attended by the locals, enjoying the fruits of their labor before all of the out-of-towners descended. Therefore, it was nearly impossible to get within spitting distance of the Colts race car. We got close enough to get a picture, but not close enough for either of us to be IN the picture. We didn't mind - everyone was in too good of a mood to mind much of anything. Even when the one Patriots fan already in town started yelling "GO PATRIOTS" at the top of his lungs, the locals all laughed before they shouted back "BOOO!"

I couldn't have been more thrilled with what I saw. The good people in Indy know they'll probably only get one chance to host something like this. They're too small, too remote, too wintery to be considered for a second chance. They've grabbed this event by the scruff of the neck, and they're attacking it for all it's worth, even with Peyton Manning's murky future casting a shadow over the good times (for the record, I'm refusing to think about it or talk about it until August).

Good job by you, Indy. Now all we need is a Patriots loss to make the experience complete.
Posted by Unknown at 10:37 PM