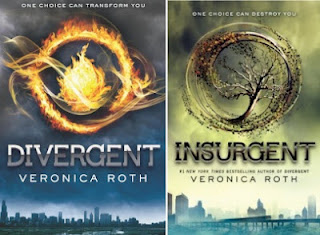 I have a copy of DIVERGENT and a copy of INSURGENT to give away, each signed by the lovely and talented Veronica Roth. I will give them BOTH away to some lucky person on MONDAY, MAY 21st. If you'd like to enter to win, just leave a comment below and tell me you feel like a winner.


I haven't finished INSURGENT yet, but here were my thoughts on DIVERGENT from last year (with minimal spoilers). It's one of my favorite books, and Veronica is one of my favorite authors. These books were signed at Anderson's Bookshop in Naperville (a Chicago suburb), where more than 200 people lined up to see Miss Veronica, an even balance between middle school/high school aged kids and old people like me. Veronica read to us from chapter eight of INSURGENT, took several questions, and then probably signed her name until around midnight to accommodate the line.

Veronica appeared last week on the TV show WINDY CITY LIVE (which, here in Chicago took Oprah's old timeslot). In this clip, she provides a little insight into the story and answers questions kind of like she did at Anderson's. This is my attempt at giving you the full book signing experience.

So go ahead and comment below, must be at least 13 years old to win, contest open internationally. Random number generator will select one winner from everyone who comments (including both Blogger and Facebook). Good luck!
Posted by Unknown at 2:15 PM