A collection of disconnected thoughts and ah-ha moments from the last weekend in April, in which Bethy attends a Romance Writers of America Conference, watches a few NBA Playoff Games, and misses the entire NFL Draft.

* If someone gives you presents, you kinda want to be their friend. RWA Chicago gave me the most incredible swag bag I've ever seen, just for showing up. Like, all I did was walk in the door and they were thrusting free stuff at me and I started to crumble under the weight of it all. As it turns out, romance writers are big on thrusting. Who knew?

(Note: There was also chocolate, but I ate that, so it's not featured in this picture.) 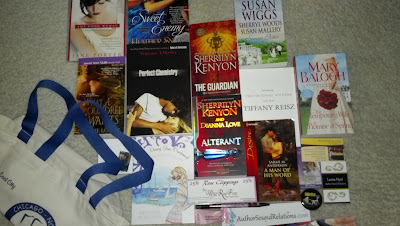 (Another Note: These are just SOME of the presents they gave us. Some. There were other books, including e-books, ARCs, autographed things, and also there were many desserts. And yes, you can come in 2014 if you want to.)

* The NBA Playoffs affect us all. Growing up a Pacer fan, the Chicago Bulls were public enemy number two (after the New York Knicks, of course). Still, even I was bummed out to see Derrick Rose tear up his knee. The whole city kind of deflated ("First the Blackhawks lose and now THIS!"). Even I groaned when I saw the clip on the TV in the conference hotel bar. I've reached the point where whenever I see an injury like that, I remember Robbie Hummel and immediately feel sad. And also, I was counting on the Bulls to beat Miami, so now someone else is probably going to have to do it. And it must be done.

You may think you don't care, but you're wrong. The Olympics are coming, and that Spanish basketball team has a bunch of NBA players on it, too. Do the right thing, America. Hope and pray that the likes of LeBron, Kobe, and Kevin Durrant are healthy, happy, and hungry for gold. U-S-A!

* YouTube both causes and cures insomnia. I had an hour drive home from the conference Friday night, around midnight. I worked so hard at staying alive, awake, alert and enthusiastic that by the time I got home I was wired. I then proceeded to watch Andrew Luck's Letterman appearance on YouTube. And then I fell down a dangerous spiral when YouTube suggested I take a little trip down memory lane with Peyton Manning and then Eli Manning at the same age. Awwww. I'm so happy right now. And yes, I have every intention of live-tweeting Eli's SNL appearance coming up May 5th (@BethanyRobison, catch the fever).

* Pitching to agents live and in person is fun. I attended a 2-hour "pitch" class at the RWA conference. The instructor spent the first half-hour or so telling us the components of a proper pitch, and then for the rest of the time, she let us submit example pitches for critique in front of the whole lecture. Two things on this:
All that being said, when you're pitching one-on-one to someone, all you're really doing is having a conversation about your book. Yes, you want to be prepared. Yes, you want to make sure you hit all the main points to present your idea in the best way possible. But, this is not high school speech class and you're not being graded on whether or not you include all the required elements. I know a lot of people at the conference recommended that you write your pitch and talking points on 3 x 5 cards and just read them in the pitch session. That idea made me very uncomfortable. I pitched to an agent. I didn't read off my notes. I had a conversation with a lovely person, and it was a blast. I'd recommend you approach it like a job interview rather than a school presentation. If that makes sense.

* It's good to investigate something you know nothing about. I don't write romance. I don't even read romance. However, I am so glad I attended this conference. It was really about writing as a craft. Here are some of the topics covered: And that's just a sampling. The point is, even if it doesn't feature your genre of choice, a well-run conference will give you more than your money's worth in takeaways, even BEYOND the bag of FREE STUFF. I'm about convinced I should try a conference in each genre, just to see what they have to offer.

* Football makes the world smaller. On Monday, Americans were skipping out of work early to watch Manchester United vs. Manchester City, battling for the English Premier League Championship. Meanwhile, my Intern is in New Zealand studying abroad, and he watched more of the NFL Draft than I did. Take from that what you will. I saw neither.

* Remember in Ratatouille when the ghost chef kept saying Anyone can cook?
I met enough people from the most diverse, fascinating backgrounds this weekend to convince me that a great artist really can come from anywhere. I met a lawyer, a radio talk-show host, a nuclear chemist, a dental hygienist, a sign painter, and a college student, just to name a few. I met people who had published nearly 50 books, people who had not yet finished their first complete manuscript. This weekend was a great reminder - you just never know where that next big thing might come from.
Posted by Unknown at 8:45 PM