Not really in on football? That's cool. But this Thanksgiving in households across America, football WILL be watched. Wouldn't you rather have dinner guests openly debating Tony Romo and Mark Sanchez's failures instead of yours?

Well, you've come to the right place! Here's a hastily thrown-together 2012 NFL THANKSGIVING CHEATSHEET, your one-stop source for easy talking points so you can spend your Thanksgiving holiday in peace... and maybe even accidentally enjoy yourself in the process.

But I gotta be honest with you: it's not exactly a killer lineup this year, lots of blow-out potential. As the Cowboys and Lions go, so goes Thanksgiving (especially since the retirement of the Madden turduckin, may all six of its legs rest in peace). I looked up the NBA schedule. And the NCAA schedules. And the international soccer schedules. This is the best we got, kids. Let's roll.

Houston at Detroit - 12:30 EST - CBS
Some holiday staples are sacred and eternal - and the Lions sucking on Thanksgiving Day is one of them. The Lions gave us a scare last year, when they were almost good, but now normal service has resumed. And Houston is a legitimate Super Bowl contender.

The Texans JUST survived an overtime scare on Sunday against Jacksonville, arguably the worst team in the league - I didn't watch the game, but it seems reasonable to question whether or not the Texans were going a little easy in hopes of surviving two games in five days with limited damage (especially considering how their season was destroyed by injuries last year - I mean, they were still competitive in the playoffs with their 3rd string quarterback - THAT'S how good they were). At this stage, the Texans just want to escape with their health, so the numbers on the scoreboard will be incidental.

A Few Quick Talking Points (or things you can shout at your TV):
* Watch for defender J.J. Watt (HOU) to SWAT a few of Matthew Stafford's 17,285 pass attempts. It looks a lot like a blocked shot in basketball.
* Calvin Johnson (DET) is still MEGATRON, even if he's only caught, like, one touchdown this season.
* Drink every time the Texans run the ball forward.
* Drink again every time the Lions do something petulant and/or borderline illegal. This includes their coach.

Washington at Dallas - 4:15 EST - FOX
This is the good game. If you watch only one, choose this one. Somebody has to win this division's playoff spot, and while we all know from previous experience it will be the New York Giants, these teams still have to keep it interesting a few more weeks.

Talking Points:
* The Redskins' rookie quarterback is fabulous fun to watch. His given name is Robert Griffin the Third. Your mission, should you choose to accept it, is to call him as many different nicknames as you can over the course of this game. RG3 is common. Bobby Three Sticks is another good one. Also, if they do any puff pieces on him in pregame or halftime, make sure to notice his socks.
* I in no way wish ill upon Cowboys' quarterback Tony Romo, but Kyle Orton is the backup and I would be endlessly delighted to have an Orton sighting on Thanksgiving Day.
* Drink every time they show Cowboys defensive coordinator Rob Ryan. He's the one who looks like a werewolf (credit to Bill Simmons).

I'm Not Ready for the Colts to be Good Again 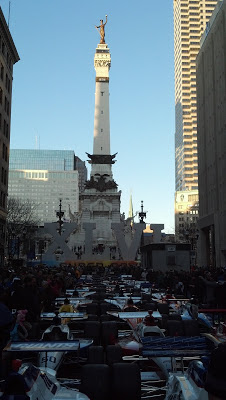 As I've said before, I was a Colts fan before it was cool, starting in the late 80′s. My earliest football memory is of asking my dad ‘who is Jeff George’ and ‘why is he refusing to play’? I didn’t know home games could be televised. For us, home games meant turning on the radio and taking a Sunday nap, except for the one great Jim Harbaugh year, in which case we had to be awake for the 4th quarter (kind of like when Tebow was still in Denver).

Back in those days, winning always came as a delightful surprise, like finding a forgotten twenty dollar bill in your coat pocket, or getting sent home from school early because the power went out.

And then Peyton arrived, with his national TV commercials, league records, and playoff games. The Colts weren’t just a Central Indiana thing anymore. In December 2010, Peyton’s last year playing in Indy, a Harris Poll showed that the Colts were the second most popular team in the league, ‘America’s Team II’ ranked just behind the Cowboys.

I’m in no way anti-bandwagon (if it’s possible to have a ten year bandwagon journey), but I’m afraid of nurturing an Indy-blue fan base that takes winning for granted like some cult of SEC wackos. I was kind of looking forward to a few down years. A little suffering can galvanize a fan base; it prunes us, makes us appreciate our team in a different way (just ask the Cubs, Red Sox, or Manchester City). After spending my entire childhood cheering for three-win seasons, I spent the last decade wearing the same facial expression as Meryl Streep awaiting the ‘best actress’ announcement. I didn’t want to get USED to winning. I didn’t want to get to the point where wins were so expected that I didn’t FEEL them anymore.

Wins are 8,000 times better when they’re unexpected – those are the ones you remember years later. That’s why this season’s Colts/Packers game was so special. I’d take a team with tons of heart over an uber-talented team every single year, and let the wins and losses fall as they may. This year’s team is especially loveable, even if I can’t name half the players on the roster yet (is it true that T.Y. Hilton’s first name is actually Eugene?).

I in no way wish they’d lost any of these games. In fact, I’m still bitter Jacksonville beat us at home. But when you do the math, you’ll see the reason for my mixed emotions. The universe is a cold, cruel place. Observe the Colts’ remaining schedule:

Indianapolis at New England, 4pm game – By their usual standards, the Pats have been herky-jerky all year, but this game is in New England. They’ll probably just [CHOMP] and then throw us out in the parking lot to rot (just like old times, guys!). Let’s hope nothing happens this week that makes them mad. (Prediction: Loss)

Buffalo at Indianapolis – As much as the Colts have over-achieved, the Bills have under-achieved. This game feels winnable, especially since it’s in Indy. (Prediction: Win)

Indianapolis at Detroit – The NFC is obviously better than the AFC this year, but Detroit has been another under-achiever so far (so glad I didn’t keep Calvin Johnson for fantasy purposes). Still, can’t count on it. (Prediction: Loss)

Tennessee at Indianapolis – At the risk of sounding like a jerk, if we don’t win, I’ll be disappointed. (Prediction: Win)

Indianapolis at Kansas City – I have nothing to add. (Prediction: Win)

Houston at Indianapolis – The Texans will hopefully be resting their starters by now. Might be nice to be on the opposite side of one of those for a change. Plus, we have hopes of a ‘Coach Chuck returns to the sidelines’ bounce. (Prediction: Win)

So the Colts *could* win 10 games this season. Repeat: ten wins is not outside the realm of possibility.

When St. Peyton left, we were promised that we wouldn’t have to worry about this for awhile. We were free to cheer for him in Denver with a clear conscience while the new baby Colts rebuilt the monster. Andrew Luck was supposed to come into his own about the time Peyton gracefully exited stage left with another Lombardi or two in his pocket. That was the plan. We made peace with it. Instead, we’re getting a smorgasbord of punny ‘Luck’ headlines and it’s only week 10. I’M NOT READY. Not for this.

If the season ended today, the Broncos and Colts would play each other wildcard weekend. What did the good people of Indianapolis do to deserve this? Were we just a little too proud of our Super Bowl hosting performance? Did we pat ourselves on the back a little too long? OKAY! We’re SORRY! Next time we’ll play it cool.

Some might accuse us of having ‘rich fan problems’ because in the case of a Colts/Broncos playoff game, no matter what happens, someone we love will win. But let me tell you, I’ve been in this situation before and it sux (with an “X”).

I attended Purdue University at the same time as Drew Brees. Though we never met, he was my first true love, back before I knew Peyton existed (that’s why it doesn’t count as cheating). When the Saints and Colts met in the Super Bowl, I was giddy – until the 4th quarter started and the sick feeling in my stomach reminded me that no matter what happened, someone I loved would suffer the Super Bowl loser’s curse. (Four neck surgeries and a bounty scandal later, it appears somehow the curse got them both. I blame myself.)

There’s still time for a Colts late season collapse to return the universe to proper working order, but I can’t make myself root for it. I love this team. I love how they over-achieve and celebrate winning and fight for their coach. I love how the whole country seems to have embraced them again, and I love, love, love Andrew Luck in all his good-as-advertised throat-stomping glory. Hell, I’ll drive the bandwagon myself so long as it’s not a stick shift. But please know, when the inevitable Colts/Broncos match-up comes, I will gnaw my throw pillows into feathery mulch because I can’t root against Peyton. I can’t, I won’t, and I DON’T HAVE TO. Sports bigamy’s a bitch. Judge me if you must.
Posted by Unknown at 11:01 PM 1 comment: