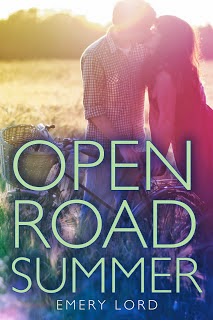 I first crossed paths with Emery Lord on October 29, 2010 (this date is real, I looked it up). The internet daisy chain that brought us together is long and tangled, but suffice it to say that we were both looking for someone willing to read and critique our "finished" manuscripts. Mine was a sort of Revolutionary era fantasy thing; hers was a contemporary young adult romance about a girl trying to reinvent herself a year after the unexpected death of her boyfriend, but told in a really smart, funny voice (look for this one on bookshelves in about a year). In those days, Emery also had a seedling of an idea about two best friends, one a shooting-star musician and the other a girl trying to separate herself from a series of bad habits; she called this idea OPEN ROAD SUMMER, and it will be available in a bookstore near you on Tuesday, April 15th.

I'm not much of a contemporary romance reader, but I fell in love with Emery's writing style when we were still strangers. Since then, she's become a great friend and writing partner, so it's a little difficult to "study" her work objectively. I was there when she was still trying to decide where to start the story (in a parking lot, beside a tour bus adorned with wildflowers). I watched her experiment with first person past tense and first person present (present tense won out). Characters changed names and song lyrics were rewritten, and every microscopic detail was attended to and optimized because that's just how Emery operates. I had a front-row seat while all the puzzle pieces clicked into place, and the entire process was magic.

* This isn't what I would consider a standard contemporary young adult romance. Our narrator, Reagan, has several interesting relationships, and one of them is indeed with an incredibly charming guy. But, this story is just as much about her relationship with her best friend, a famous musician reminiscent of Taylor Swift named Delilah (Dee for short). One thing Emery does as well as anyone in the business is craft compelling best friend relationships, and this is a pattern readers will notice through everything she writes. There are also specters of Reagan's long-absent mother and troubled ex-boyfriend; we never see them, but we can still feel their lingering impact.

* This book has a riveting and intelligent first person narrative voice. Since I've had the luxury of reading three of Emery's manuscripts now, I can say with confidence that all of her first person narrators have completely distinct voices. It's almost like she's performing a one-woman play, channeling the character in every tiny motion, every feeling, every word. When we meet the narrator of OPEN ROAD SUMMER, she's just decided to quit smoking, quit drinking, quit her ex-boyfriend, and put literal geographic distance between herself and her rock-bottom moment by going on tour with her famous best friend. Reagan doesn't always make the best choices, but she's trying; she's three-dimensional and real. You can hear the clacking of her trademark high-heeled shoes and the shutter of her camera. At times you can even feel her glaring at you, but you love her just the same.

* Another thing Emery does as well as anyone: she creates these tiny, poignant moments and wrings all the emotion right out of them. OPEN ROAD SUMMER is an especially nice showcase for this because our narrator, Reagan, is a photographer. She's always looking for these snapshot moments, and when she finds them, she captures them, internalizes them, processes them, and reacts to them. Reagan does this with her friend Dee, capturing her open spirit, how she treats her fans, how she handles the press in the midst of scandal, and how she behaves when she's out of the spotlight. Reagan does this with her father, a recovering alcoholic who managed to pull his life back together after his wife walked out and left him to raise his daughter alone. And, she does it with charming former boy-bander Matt Finch, who joins Dee on tour, both as a personal favor to a friend and in hopes of finding something to break his longstanding songwriter's block. Reagan, for all of her rough edges and attitude, realizes that everyone around her has a story to tell (including her), and her photographer's eye captures the key thousand words.

This book is such a satisfying, pleasant read. It made me laugh, and funny is such a rare and delightful treat. It's fun without being fluffy, it's substantive without being heavy, and it has just the right amount of romance (of about a PG-rated level) to satisfy readers who want it and to not bog down readers who don't really care about that stuff.

AND BECAUSE I KNOW YOU WILL LOVE THIS BOOK I'M GIVING IT AWAY
If you'd like a free copy of OPEN ROAD SUMMER, enter by leaving a comment below, and please include a twitter handle or some way for me to contact you if you win. On May 1, 2014, I'll choose a winner using a random selector. If I get enough entries, I'll give away TWO. This is open to readers in the United States and abroad. Thanks!

UPDATE: I'm reminded that leaving comments on these blog posts isn't as easy as it used to be. If you don't want to mess with the Google comments, you can also enter through email (bethany at bethanyrobison dot com) or contact me on twitter (@BethanyRobison). Thanks!

Posted by Unknown at 4:53 PM No comments: