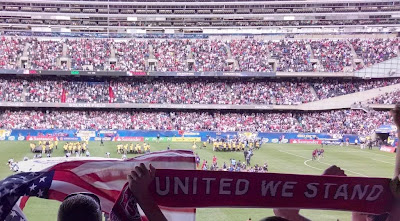 On Sunday July 28th, the United States defeated Panama to win the 2013 Gold Cup. What is the Gold Cup? A soccer tournament held in odd-numbered years to crown the best national soccer team in the hemisphere (North America, Central America, and the Caribbean). This year, the final was held in Chicago, so the husband and I hauled our cookies to Soldier Field in the name of Klinsmann and Country.

PREGAME NARRATIVE
The honest to goodness truth is that (at least this year), Team USA did not field its first-tier team for this tournament; players like Clint Dempsey and Tim Howard got to spend the month of July fishing and napping. Instead, Coach Jurgen Klinsmann brought in second team players he wanted to audition for his World Cup campaign next year in Brazil. This was hardly disappointing, since the second team contained the most fascinating narratives going in US soccer this year. For example:

* Landon Donovan - the golden boy of American soccer relegated to the second team after taking voluntary leave of his sport for reasons that have still not fully been explained. Was he simply burned out and exhausted? Or, as some have speculated, struggling with depression or other mental illness? Or, like I've heard once or twice, just behaving like a 'flaky Californian'? Whatever inspired the face of American soccer to just walk away, he needed to rediscover his fire. He stepped away and lost his spot on the team. Could he prove that he wanted it back? 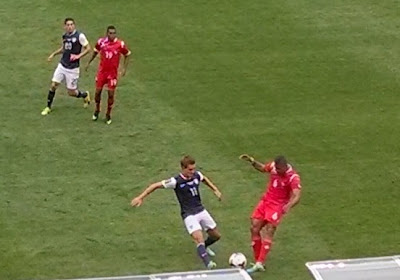 * Stuart Holden - with a great personality and even better hair, Stu (number 11 above) was an American star in the making - the kind of guy that even soccer agnostics would gravitate toward. Unfortunately, his career so far has been a Greek tragedy of freak injuries and set backs. After missing more than two years of action, Stu was named to the Gold Cup squad, and the people rejoiced. Could his bad luck finally be behind him? Would he finally get the chance to live up to his potential?

* Chris Wondolowski - the leading scorer in Major League Soccer (MLS, America's domestic league). Conventional wisdom has historically indicated that only the guys who played in Europe could compete in the elite tournaments. Landon has played in the top tier in England, as have Brek Shea, Geoff Cameron, Stuart Holden, etc. Several guys have played in Germany - hell, several guys were BORN in Germany (to United States soldiers stationed overseas). Team USA also has several guys who play in Mexico's soccer league, such as Hercules Gomez. But what about the guys who play their entire careers here in the States for MLS? Can home-grown, home-developed players contribute to the National Team in a meaningful way? 'Wondo,' a gentleman of Native American Heritage (Kiowa, to be specific) is challenging old perceptions and changing how we view our local league - but would he force his way onto the first team?

* Jurgen Klinsmann - our coach and fearless leader, German by birth but American by choice. Since Jurgen got this gig, there have been stories of dissension in the ranks and bad chemistry in the locker room. Going in to the Gold Cup Final, Team USA was on a healthy winning streak - but did this mean that Jurgen had finally figured things out? Was he really the man to take American soccer to the next level? And why in the world did he get suspended for spiking a soccer ball during the match prior to the final? Why did he even HAVE a ball to spike?

PREGAME ACTIVITIES
It was a perfect Chicago summer day - about seventy degrees, overcast sky, the water of Lake Michigan was a picturesque deep blue with a fresh, lovely breeze, and Lake Shore Drive was as adorable as ever with its 40mph speed limit. Traffic was thick with our fellow patriots headed to the game - we could see the flags and the Team USA jerseys - so much red, white, and blue that it might as well have been July 4th instead of July 28th. We felt a sense of community, and it was glorious.

This was our fifth time attending an event at Soldier Field, so we should have known better, but no. Once again, for a fifth consecutive time, we did not allow enough time to get to the stadium, park our vehicle, get INSIDE the stadium (a sneaky-big time suck), and find our seats before the event started. To make it even more ridiculous, we'd expected to get there in time to tailgate in the parking lot with all of the other fun people (like the guy dressed as Captain America flitting from party to party no doubt getting free samples of all of the delicious things we smelled cooking as we sprinted toward Soldier Field's West Gate).

The point is - at least where Soldier Field is concerned - allow at least three times more time than you think is even remotely reasonable. Chicago has fantastic sports fans, but there were still several of us who missed the first kick of the game trying to get inside. We missed the pregame activities. But we're sure they were moving. 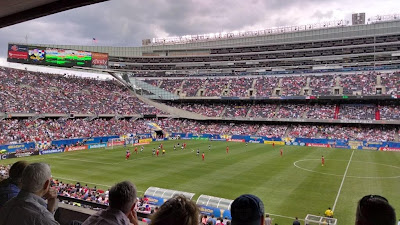 When we found our seats, about 7 minutes had passed, and the score was (thankfully) still zero to zero. Team USA was in blue, Panama was in red. Our first order of business - get the lay of the land. Landon was easy to spot, as were Stuart Holden and Kyle Beckerman. We saw that the Team USA goalie had a full head of hair, so that immediately made us feel a bit uneasy. The man sitting next to me had an American flag in his lap, ready to wave it in celebration, but he was frustrated with the boys ("They're inbounding the ball too slowly, they need to stay on their feet," etc). He seemed to know what he was talking about. In front of us, there was a dad with his son and daughter (both of elementary age). They seemed new to the game, and they turned around to ask us a few questions, but it didn't dampen their enthusiasm. The people behind us were dressed as Uncle Sam and, I guess, Auntie Sam? Our section was electric, chanting and laughing the entire game.

Everyone we saw that day - from the parking lot to the stadium - was as cheery as the weather. We saw fans from Mexico and Columbia, in addition to the sizable contingent from Panama. But the crowd was overwhelmingly American, and about as diverse and enthusiastic as you can imagine. The entire day was a gigantic party.

Until about twenty minutes in. 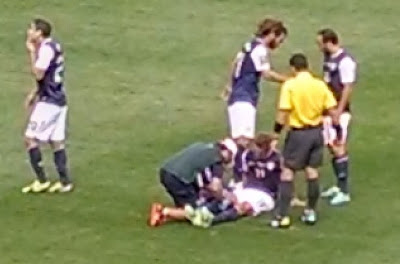 Stuart Holden collided with one of the players from Panama, then writhed on the ground, clutching his knee. The stadium went quiet - I'm not sure how many people in the stands knew his story, but I didn't hear one spectator profess any disgust at soccer players "flopping." We found out later that poor Stuart had torn the ACL in his bad knee. He spent the rest of the game in the locker room, but limped out for the victory celebration. His teammate Omar carried him on his back for their victory lap around the field, and the team saw to it that he received his medal first. Heartbreaking stuff. For now, Stuart's story is to be continued...

THE SECOND HALF
Stuart's injury put a damper on the the remainder of the first half. Coach Jurgen was tucked away at the very top of the stadium like Rapunzel or somesuch. The game was still tied at zero, and things were not going overly well. Panama as a team looked like they just wanted it more.

But NO ONE looked like they wanted the Gold Cup more than Landon Donovan. He was all over the place, playing more defense than we expected (but what the hell do we know?). It was interesting to watch him move around the field - an opportunity we'd never had before, since the TV camera follows the ball most of the time. I've had my share of giggles at Landon's expense over the years, but in this game, Landon chose his spots like a chess player, sometimes crossing half the pitch to play defense, even if there seemed to be another player much closer. Sometimes he charged, sometimes he stood still, watching like a point guard, and I wished I was sophisticated enough to understand what I was seeing. Regardless, I was impressed.

About seventy minutes into the game, Landon got the ball in front of the goal, and the blond mullet of Brek Shea made sure it counted.

Team USA celebrated, and the crowd at Soldier Field exploded, hoping the game would blow wide-open now that one ball had found the back of the net. Could they score one more? Three more?

Well, they scored zero more. Panama was NOT a bad team. Their goalie won the award for best keeper in the tournament, even though Team USA didn't make him work overly hard. The game got a little chippy at the end. Brek Shea broke up a fight one minute, only to receive a shot to the back of the head a moment later. As soon as the 'end of game' whistle blew, Brek knocked his nemesis to the ground (even though they were right at midfield), and my husband giggled. The lesson, as always, don't screw with Brek Shea's hair. 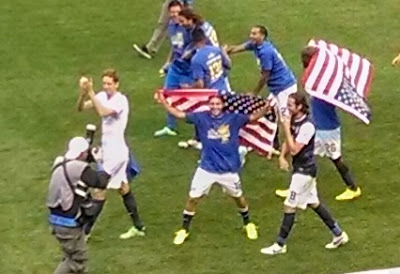 A stage was hastily constructed, lovely ladies in blue dresses carried out the trophies. Team USA jumped and danced together, put on championship t-shirts, and took a victory lap around the field, clapping in the direction of the fans, perhaps thanking the nearly 60,000 people who filled the stadium to cheer them on. Panama accepted their silver medals, then vacated the premises. Landon Donovan and Chris Wondolowski each got a share of the 'golden boot' trophy (the award given to the player(s) who score the most goals during the tournament), even though Wondo didn't play in the final. Landon won the equivalent of the tournament MVP award, and Soldier Field chanted his name. At the moment, he seems to have made it virtually impossible for Jurgen to leave him off the World Cup roster. 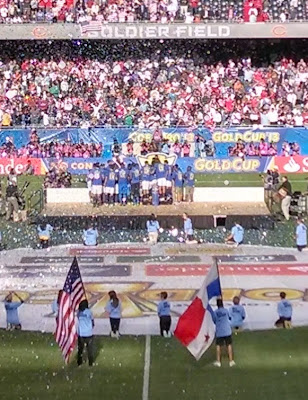 Then the confetti canon erupted, shooting out tiny bits of shiny blue and gold paper that swirled in the lake breeze and scattered all around the stadium. Several pieces reached us, and I put one gold confetti piece in my pocket. By the time I got home, it was gone - just like the bell from Polar Express. But at any rate, I learned that confetti canons are underrated. The camera does not do them justice.

So, we drifted out of the stadium on a cloud of victorious euphoria. Chants of USA followed us out to the parking lot (and one gracious American honored a group of Panama supporters with a cheer of 'Viva le Panama!' which was greeted by a cheery laugh). People weren't in a big hurry to leave (Chicago sports fans are pros - we all knew full well that there was no point in hurrying, since the traffic wouldn't allow us to leave quickly anyway). Some kids set up make-shift goals in the parking lot. Some fans turned their grills back on for a lake-side tailgate dinner. Music blared, and the party continued, even though the tournament was over. Chicago has fantabulous sports fans, but soccer fans are special. Win or lose, it's a community I'm proud to be a part of.
Posted by Unknown at 10:55 PM No comments: